Social Media, what you can lose by not using it

I have been studying social media statistics for quite a while, and here’s what I’ve found in relation to: 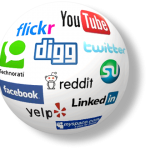 Strategies and Web Design, were discussing social media the other day.  We discussed the potential, and direction of social media.  These questions influenced me to write this article.  Thanks Nina.

It’s like this.  Look at a town that has an older population.  They continually reject increases in funding towards their school systems.   Reason being is the people who are running these towns are older and have no children in the system, therefore no interest in making the school system better.  As most of us know, a good school system runs parallel with increased property values, they run hand in hand.  The problem is when towns choose not to invest in the school system, and remain competitive as to attracting new people to the town, the town suffers, and tends to fall back.  The town doesn’t die, but it is not as attractive as it was in prior years since they didn’t keep pace.

In my opinion, social media has, and will have the exact same effect in a lot of circumstances as it relates to how business is done.   If you don’t keep up with the change, you will fall back.

The 55 year old and above crowd, have some, but not a lot of dependency on social media.  They usually are retired or thinking about retirement around this time, not really sure what it is and don’t have an interest in adapting to, it or changing.  This is fine in my opinion.

The 40-54 year old age group ha a similar story.  Here there lies a problem.  These are the people who are in the peak of their careers.  Remember, for this group, the internet is an adopted language unlike the people in their 20′s where the internet is their native language.  They never used it all the time like the younger generation does today.  The problem here is that a majority of this age group uses social media sparingly, if at all.  They find no reason to adapt or change, most think it is useless or do not want to commit the time to change.

The younger generations   19-25 were the primary users of social media up until about 12 months ago.  This generation were the early adopters, the pioneers, they tested it out and said, hey this stuff works.  You can communicate instantly and there’s a lot of information to gain by using this stuff.

Corporate America was soon to follow.   Corporations   Companies like Coca Cola, Ford, Starbucks, ATT, Whole Foods, H&R Block, Best Buy, Comcast, Jet Blue, and Samsung to name a few, utilize social media on an hourly basis.  Go figure, this is the direction that business is going.  Instant communication is becoming the norm, people do not have to wait if they don’t want to, and large corporations find value in following trends and what people are talking about.

How it’s being taught

It’s being taught here and there, but hasn’t really been adopted at the university level.  Remember, social media is still a baby.  Back in the late 80′s when technology was just taking off, technology was not being taught.  Back then, you could walk through a software company, and the people who occupied  positions in these companies were everyday people from everyday occupations that decided to teach themselves.  Teachers, firemen, construction workers, retail associates, I saw every single occupation jump over to technology because of where it was going.  It wasn’t until the mid to late 90′s that the Universities caught on and introduced it into their curriculum.   The same goes for social media.  The people who are getting involved in it today are learning it on their own.  There are help manuals and directions and opinions on how to use social media, but there are very few classes to take.  That will change.  I believe, like technology back in the late 80′s, people are finding value in social media, therefore making the time to learn it.

What you can lose by not using it

I ask most people how they find information today, most will not tell you the yellow pages.  In fact, a high percentage of people querying information is via an internet search.  Let’s look at small business.  You have had clients for the past twenty years.  They are loyal to you as you are to them.  I do not foresee a big problem or a necessity for social media with small businesses like this.   Now if you want to grow your business, or start something new, that’s another story.

Take for example two plumbers,  who live in xyz town.  Both starting  their new businesses.  One goes by word of mouth, tells his/her family and friends about his/her new business.  The other one, does the same, but in addition has a blog/website that gives out tips of the day on plumbing stuff, how to fix leaks, how to maintain your disposal, how to fix the handle on a toilet etc. etc.   I’m almost certain that if someone searches on the internet, plumber, in xyz town, the one with the blog/website will pop up, not the other one.  This is what I mean by what you can lose by not using social media.  The plumber without it doesn’t lose business since he/she never had it in the first place, they lose opportunity.

Social media (for business) is still a baby, in my opinion it’s not even walking yet.  Over the past 5 years or so people used it personally, and all of those people are a customer of one thing or another, so businesses finally figured it out.  I believe the increase in popularity for businesses using social media will be astronomical over the next 12-36 months.  The big question is, will organizations be able to live without it 5 years from now, or will this be the norm.  Only time will tell.  One of the most important lessons that my mother taught me.  She stated “Bobby, remember one thing in life, the clock stops for nobody”.  That still holds true, and I don’t think social media will wait for anybody either.